It’s always funny looking back at old artwork. This is because I look at it with all of the feelings and emotions I was applying at the time of its creation, yet I’m also looking at it with my more current artistic views. So there ends up being this two-way reading of a work. What I felt then and what I feel now. Which can either be quite paralleled, but more often then not is more of a “what the hell was I doing?!” kind of reaction. It’s sometimes quite amusing to see the difference in the two thought processes. One of the reasons I am so grateful that I’ve made art throughout my life, is that all my works are essentially a document and narrative to my growth and development. Or at least, to my development as an artistic practitioner. It is me expressing myself during a given time period and over the years my drawings have taken on all sorts of forms. These include Beatrix Potter-like creations of animals in clothes, fashion illustrations, running inky portraits, landscapes, sketched copies from the work of Egon Schiele and Michalengelo, life drawing, the list goes on. The above image is from my experimental phase with Indian and batik ink. I love the fluidity and seeping of colours, as I never know how a piece is going to turn out, which for me is incredibly exciting. This way of working led onto a whole bunch of ink-based experimentation and essentially changed the way I paint forever, as I still apply dripping and watered-down techniques today. Funny how one thing can lead to another and you never look back!

When I was young, this kind of thing was basically all I drew. Animals dressed in clothes in all sorts of scenes. I think I must have done this one when I was ten as it’s Victorian themed and we were studying the Victorian Era around that time (I remember being horrified by what the poor chimney sweeps had to go through. Let’s just say it was nothing like Mary Poppins suggests!) I also drew an ongoing love story between a cat and a dog. Not very original I know, but as a youngster I felt I had kind of premeditated Captain Amelia and Dr Doppler’s love story in Disney’s ‘Treasure Planet’ – still one of my favourite films to this day! For any of you that haven’t seen this film, put it on your to watch list right now! 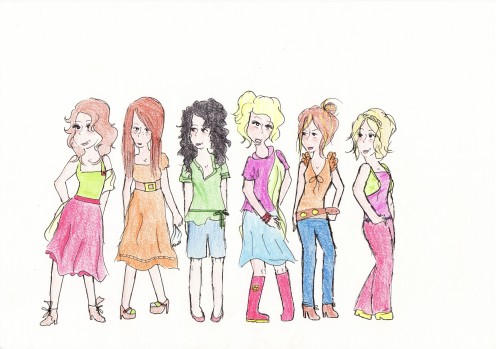 As I got older the dressed up animals progressed and evolved into humans. It may have been because I was saying goodbye to cuddly toys and instead spending my money on new skirts and shoes. It’s only really now that I’m writing this that I realise my art really reflects the progression of my life and the experiences I have had. Currently my love of health and fitness fuel my interest in the human body and have done for about five years now. But at the time I was doodling all of these characters I was only just beginning to get interested in expressing myself through my clothes. I think I drew every outfit I could possibly think of! I had my characters wearing clothes I would never dare to, such as hideously girly pink combinations. I also had them wearing things I wish I had been brave enough to try, such as all sorts of wacky hair styles. It was around this time that my own style was distinctly changing and I was discovering make-up. I had a hideous phase of turquoise eyeliner (what was I thinking?!) and logo T-shirts…So I guess my characters were a reflection of my experimentation with my self-image. 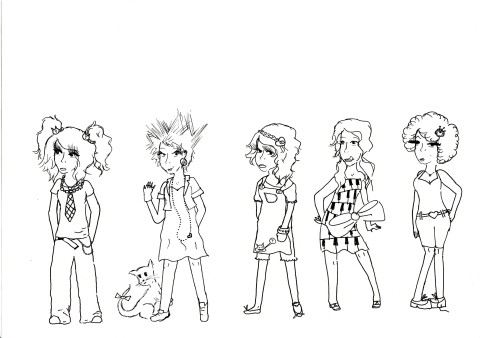 Despite my passion for drawing, I was also lazy with it. Colouring was not my strong point, I got impatient with it as I was more interested in creating as opposed to filling in what was already there. So fine liner pens in all sorts of thicknesses were my best friends. They gave me the freedom to be loose and scratchy with my creations. Some of my favourite past works are in fact the monochrome ones as the lack of colour forced me to be a lot more imaginative with what I created. The above drawings are of characters that later formed my imaginary girl band ‘Quirky Duo’.

So that’s my childhood evolution as a drawer. At this point I wasn’t very experimental with materials – that all came later. My youth was more of an outlet for my imagination. All the story books I read as a child were definitely a huge influence, as was the TV programme ‘Totally Spies’ and probably the bands I listened to at the time (yes, S Club 7 did feature and I thought I was really cool…) There’s a giant box still under my bed filled with years worth of drawings. I haven’t opened it in such a long time and for some reason I feel scared to. I think in a way I’m reluctant to let go of my childhood. It’s all safely stored in that box and for now it’s best kept that way.