Last week I attended a talk followed by a preview of Ken Currie’s work in The University Gallery. Ken Currie is a Scottish artist who’s work predominantly focuses on the human body (yes I know I go on about the body in art a lot, deal with it!). For those of you who are not familiar with his work, prepare to be amazed. His work is haunting, it is eery, yet it is beautiful. It explores themes such as mortality, illness, death, politics, you name it, it’s all there! I have loved his work for years, so when I found out he was doing a talk, I got a bit excited. I lie. I got VERY excited! Not only did I get to hear one of my favourite artists talk about their work, I actually got to talk to him myself and ask all the questions I’ve ever had about his pieces in person! (Yes, I was maybe a little star struck!) I did have this slight fear of meeting him though. What if he didn’t live up to my expectations? What if he as a person affected the way I thought about his art in a negative way? I need not have worried. He was witty, incredibly Scottish and very interesting! 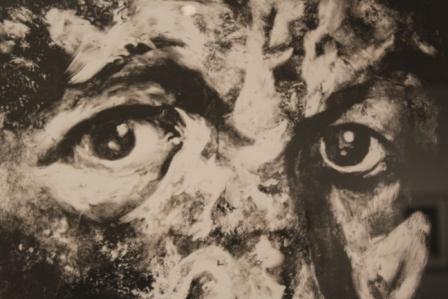 The work in this exhibition is very different from what I’ve seen of his previously. It’s more printer then painterly based which is not like Currie at all. It was however very interesting to see his painterly mindset translating across into the realm of print. The way he talked and spoke about his etchings and monotypes was a mindset I could relate to – normally printing is an alien world for me, but Currie made it accessible. As well as discussing everything he had learned in the Glasgow Print Studios, he also went into a lot of detail over who he had chosen to depict in his images. Political activists such as Rosa Luxemburg featured (see below). Currie has always had an interest in history which I think is another reason I am such a fan of his work (yes, you guessed it, I am a history nerd). When he spoke about who was in his portrait, he was also talking how he’d arrived at that particular image. It was purely through repetition. By producing print, after print, after print. Whether he chose the first or last one to display didn’t matter, what mattered was that he had pushed that one image to its absolute limit. When asked how he selected which print to display he said “I think they’re all surprises, that’s why they’re here” Again, a very attractive feature of his art. Pushing it to the point of exhaustion. I in a sense do this too, not to the extent Currie does, but I do drawings repeatedly, just to see what happens as they change every time. As Currie said you have “absolutely no idea what’s going to happen!” Which is the excitement of making art of course. 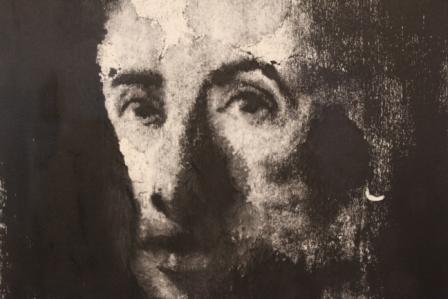 Another thing I find so intriguing about his work is the motif of death. A lot of people shy away from this and treat it as a taboo so it’s refreshing for an artist to address it so directly. Currie’s basically saying ‘shit, we’re all going to die’. Yet he’s also saying that this eventual event, the event of death, is what makes us live life the way we do. If we were here forever would we push ourselves the way we do? Would we enjoy ourselves and value everyday? As Currie did actually say, the inevitability of death “forces us to live in the present”. When I asked him what he was trying to convey through this focus and exploration of such a morbid motif, he said he supposed it was an appreciation of how “fleeting our lives are”. 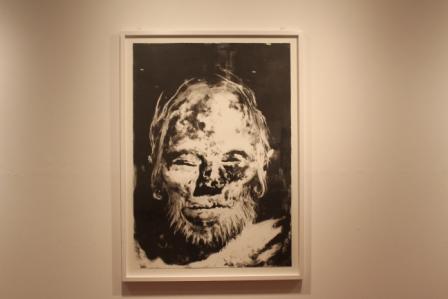 The monochrome colour palette only adds to this sense of the macabre. It’s dark and it’s gritty. It’s haunting. But it evokes something in you. Even if it is just an incredible appreciation for his skills as an artist (seriously, the way he has manipulated ink – stunning!) When I visit an exhibition I want to feel something. I want to walk round and leave thinking about the work. Currie’s does not fail me. I felt uneasy, like every piece was watching me. But I also felt peaceful, because all the works were beautiful despite their dark connotations. And I suppose it’s that delicate balance of beautiful and ugly that make Currie’s work so incredible.