I was looking through some old work when I came across these images of my First Year studio. This was probably the one and only time my choice of topic deviated from Body Art and instead focused on the natural landscape. I think I surprised even myself in this shift as there was no real explanation for it apart from my discovery of oil paint. I think I felt that abstract landscapes were a better means of exploring this medium, as opposed to again working with the female body which I was already so familiar with. This shift was also due to the fact I discovered the work of John Virtue (see below).

I fell in love with his whimsical monochrome depictions; how they were abstract yet figurative simultaneously. How he combined nature with industry. The blend of such intense darkness against the stark white also lends a satisfying balance to his work I found. This equilibrium allows the eye to shift peacefully across the page, taking the time to absorb intricate aspects such as texture which are so imbued with the studio aesthetic. 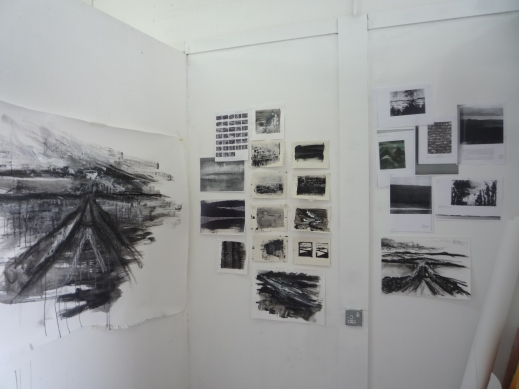 What I found particularly interesting about Virtue’s work was his ritualistic aspect of his art making. Every day without fail he would walk to the same location to sketch. This of course resulted in an excess of drawings, but the dedication this required fascinated me. So for a while I chose to copy this method of working and walked to a park everyday. It was quite out of my way and in some cases an inconvenience to all of the other daily necessities occuring in my life. However, having this task and this escape also gave me the best kind of zehn I could have wished for. I had an excuse to leave behind the rush and pace of daily life to focus fully on ritual-based art making.

I also tried to employ Virtue’s use of the monochrome palette by removing colour from my work. Depicting landscapes and working with oil paint was a time where I was using really vibrant and sunset-based hues, so this removal was a real challenge for me. It forced me to think a lot more critically about texture, shape, scale and all of the other elements that could compensate for lack of colour. I poked needle-thin holes through paper, I worked with impasto and modelling paste, I used charcoal and inks to create that messy studio look. I tried everything and had great fun experimenting, but of course I gradually began bringing colour back into my work. I also sadly had to stop my daily excursions to the park given all my other commitments, but I may some day start that again for a brief period at least. Employing the working methods of another artist was a really interesting and liberating experience for me, as I was giving up all sense of control that I had over my work and instead completely yielding myself to working in a certain way. It was an incredibly enjoyable experiment and is something I think I’ll definitely go back to at some point!

I think a lot of the time the danger with art is over thinking it. There is all this pressure on you as an artist to be conceptual, to have ideas that feed and fuel your work, when sometimes all you want to do is sit down and paint. I think that’s why I like this piece. I was flicking through images on my laptop and came across this work from First Year. It’s nothing special, but it just cracks me up every time I look at it due to it’s connotations. I am religious about going into uni. I hate being ill. However, on this occasion I was so hungover I should probably have been smart and stayed home. Did I though? Of course not. Instead I came in wearing sunglasses, looking like I’d just rolled out of bed and carrying a very strong black coffee. What should have been a complete write off of a day ended up being quite a laugh.

I was definitely not my usual production self. Instead, I choose to nurse my hangover by lying on this large roll of paper and just tracing my body in different positions. It was very interesting actually as I didn’t just use a singular line, I used colourful scribbles. And it was surprisingly therapeutic. Not that there’s anything therapeutic about being as hungover as I was! But hey it was self-inflicted, so what can I say? I had a good night, just a killer headache in the morning! 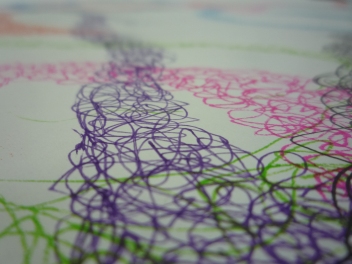 Needless to say, my studio pals found it hilarious. For someone who is normally up gyming at 7 in the morning, lying curled up on a roll of paper is the last thing they would have expected walking into my studio. I think that’s one of the best things about working in a studio environment, you never know what’s going to happen! One day someone’s studio might have nothing in it and you wander where the hell they are. The next day it might be like a Mary Poppins handbag of surprises and blow you half away! You just never know…I think in this instance, I didn’t know what the hell I was doing. But to me, it’s better to do something then nothing. Scribbling in these colours led to a whole new series of works (see https://themindofmilla.com/2015/10/12/first-year-work/) and that’s the thing, you just never know what’s going to happen.

So why waste a day? Why sit and do nothing when you can get up and go? Why become a zombie in front of Netflix when you can walk along the Quayside, or go to the library and read a book, or go out with friends and have fantastic conversations? Do what excites you, be spontaneous, be stupid, do all the things you’ll regret and learn from when you’re older. And have fun while you’re at it!